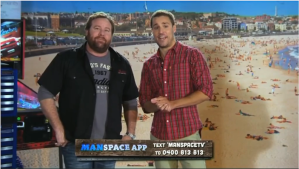 It wasn’t all goodbyes as ManSpace TV concluded their first series with a bumper final episode this week on GO! They launched their ManSpaceTV Shareable App, by asking viewers to text ‘ManSpaceTV’ to 0400 813 813 and the viewers didn’t disappoint with a deluge of texts and app downloads following the call out. A social media burst in the lead up to the finale saw some fans, like @Brad_SilverFox comment favourably about the app:

The idea is to keep fans engaged until the next series of ManSpace TV is announced. Fans can upload pics of their very own Man Caves via the app which can then be viewed on Instagram, also via the app.

Harvey Silver, producer of ManSpace TV, head of Silver Spoon Productions and ex producer of The Footy Show, also commented “ We’ve been looking for an app that could reach as many people as possible, be innovative but still relate to the ManSpace TV audience, and we’ve found that in Shareable Apps.”

Fans can share the app directly with friends, family, colleagues etc. via SMS, email and social media, and because Shareable Apps is completely cross platform, more people than ever can have the ManSpaceTV Shareable App on their own smart phone or tablet. Fans receiving the ManSpaceTV Shareable App link and downloading it to their smart phones.

Adam Friedman, CEO of Shareable Apps said. “We’re excited about working with ManSpace TV and the team at Silver Spoon Productions, we see huge potential for the app and hope to bring the fans along for the ride.” For ManSpace TV updates, competitions and more, install the ManSpaceTV Shareable App to your smartphone now.

To find out how Shareable Apps can help your business or to sign up for your free account go to shareableapps.com