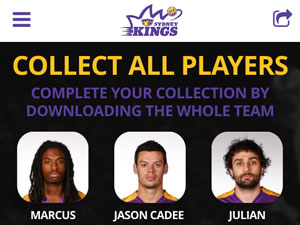 We’re very excited to announce that in a world first, the Sydney Kings have partnered with Shareable Apps™ to bring you a range of collectable player apps that you can download directly to any smartphone or tablet.

There is one for every player, including Head Coach Joe Connelly and the famous Sydney Kings Lion mascot.

The Sydney Kings Shareable Apps™ were officially launched during their first game of the NBA season, against Melbourne United on Wednesday 30 December.

Fans simply had to text the first name of their favourite players to 0400 813 813 and the link was sent to their smartphones immediately.

The apps can still be accessed in the same way or you can scroll down and tap on the web widget of any of the players you prefer or go directly to the Sydney Kings website and select the app links of the players of your choice.

The apps act as a piece of collectible, virtual memorabilia since the players can sign the apps directly. Fans also have access to player stats, news, social media updates, video highlights, ticket and merchandise purchases and more.

The beauty of the apps is that fans can share the apps amongst themselves, with friends, family, colleagues etc, just by selecting the share panel, top right within each app – no app stores required!

“We’re always looking for new ways to engage with our audience, excite them and keep them returning to games, Shareable Apps™ are the perfect way to do that. said Craig Meagher, Sydney Kings CEO.

“The app will update throughout the season so fans can check back regularly and have the players autograph individual apps at the game,” said Meagher.

Each player card app sits on fans smartphone or tablet –  prime mobile real estate. So running app-only offers, VIP competitions and last minute deals are available to fans at the touch of a button.

“We’re proud to announce our partnership with the Sydney Kings and are pleased to bring our world first Shareable Apps™ technology to their fans,” said Adam Friedman, Shareable Apps CEO.

The Sydney Kings Shareable Apps™ are a significant mobile marketing strategy to their broader promotion of the players and the team this year as they take the NBA by storm.